CWL --- Far From Heaven: Compromises and Conflicts of Faith By Yankee Soldiers 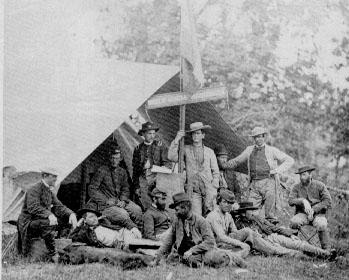 No Nearer Heaven Now But Rather Farther Off: The Religious Compromises and Conflicts of Northern Soldiers, David W. Rolfs, in The View From the Ground: Experiences of Civil War Soldiers, Aaron Sheehan-Dean, editor, University of Kentucky Press, 2007, pp. 121-144.

Religion was the prism through which many Northern soldiers viewed and interpreted many their wartime experiences. Noted historians Stephen Woodworth, Reid Mitchell, Earl Hess, and Edward Ayers have emphasized that a large number of Civil War soldiers were intensely religious. Personal identity and worldview were firmly rooted in a commonsense reading of the Bible and when their understanding of their place in the world collided with warfare, soldiers turned to God for strength to endure the crisis. (p. 138)

Like any soldier today, the terrible emotional burden of combat placed soldiers in a position to consider the errors of their lives and to also be courageous in the face of death. Yet, beyond this surface viewing of the religious life of the soldier issue, David W. Rolfs adds the dimension of the severe psychological suffering which soldiers experienced.

Even as soldiers became acquainted with cognitive dissonance, that is when beliefs and behaviors are mismatched, they also experienced moral dissonance, that is attitudes and behaviors are mismatched. Moral tension and guilt are, at times, dealt with by the soldier changing his perception of his identity. The evaluation by historians of a soldier's self-perception is risky business. Rolfs admits that "it may not be possible to properly diagnose a soldier's psychological state on the basis of a few letters, but one can certainly make a reasonable hypothesis based upon the evidence." (pp. 134-135)

Depression among soldiers who held Christian beliefs was likely states Rolfs. in soldiers' letters he has found deeper emotions than the feelings of a guilty conscience. Stereotypical explanations such as the failures of simplistic faith, a focus on other-worldliness, and one dimensional understandings of sin, just does not match up with the religious content primary source documents. "The common soldiers' faith was actually far more realistic and complex that previously portrayed--realistic, in that it was a practical faith that seriously addressed the everyday problems believers encountered living in a fallen world, and complex because it was a comprehensive faith that encompassed a wide range of changing religious sentiments, from the steadfast certitude of the seasoned saint to the despair of a less mature believer suddenly confronted with doubts.' (p. 139)

For a copy of this essay, request it via inter-library loan or email The Civil War Libarian.
Posted by Rea Andrew Redd at 11:48 PM