CWL --- In A Strange Land: Christian Soldiers at War 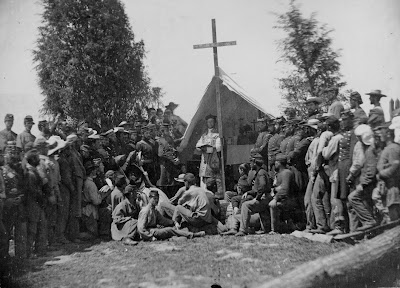 Strangers in a Strange Land: Christian Soldiers in the Early Months of the Civil War, Kent T. Dollar, in The View From the Ground: Experiences of Civil War Soldiers, Aaron Sheehan-Dean, University of Kentucky Press, 2007, pp. 145-169, notes.

7p-1:55a Written, Directed and Produced by Thomas Lowery, author of the Courts Martial Series, The Story Soldiers Couldn't Tell, and Sexual Misadventures During the Civil War

2a-6a Written, Directed and Produced by the Holy Spirit

"I have gone entirely wild and If I ever get back I shall have my name taken off the church book for it is a shame and disgrace to the cause of Christ to be there. . . .
. . . pray for me but look upon me no longer as a worthy member of the church," confessed Marion Fitzpatrick, 45th Georgia, December 15, 1862.

Wartime diaries of chaplains, both North and South, reveal that most soldiers showed little or no interest in religion at the outset of the war. Military campaigns, the meager number of trained chaplains and the general lack of interest among the enlisted men caused a decline in both the frequency and availability of religious services in camps. "Men who four months ago would not use a profane word can now out swear many others and those who would even shun a checker board now play cards for profit," reported Cyrus Boyd, an enlisted man from Iowa.

Drew Gilpin Faust and Steven Woodworth, scholars of the Civil War era, agree that camp life had a morally damaging effect on Northern and Southern soldiers. Kent Dollar, the author of this essay, has found many individuals who either resisted temptation or recovered after submitting to it. Usually, individuals with a kindred spirit managed to find each other, either in a neighboring company or in a neighboring regiment. Believing chaplains (and Thomas Lowery has shown that chaplains at times succumbed to temptations) were at many times scarce in the armies. Not finding a suitable chaplain exercising a gift for preaching, Allan Geer of the 20th Illinois decided to attend a Methodist and later an 'Ethiopian' worship service while campaigning in Tennessee.

During camp life, an enlisted man's time alone was a rare experience. Soldiers read their scriptures during guard mount or wandering away from camp. Over and over again, Dollar reports the importance of religious literature sent from home or distributed by the Christian Commission, which kept lending libraries in the camps. These portable book closets contained both the classics of literature and devotional materials.

By the early winter of 1862, in both the eastern and western fronts, revivals began to occur and continued to be launched in the early winters of 1863 and 1864. The impact of religion and revivals on soldiers' motivation to continue combat in the springs of 1863, 1864 and 1865 has been addressed by Peter Carmichael, Earl Hess and James B. McPherson. The seedbed for these revivals were the believing soldiers themselves. "Thousands of devout Christian soldiers were holding firm to their religious convictions and relying of their faith to get them through the first months of the Civil War," states the author.

To obtain a copy of this essay, ask your librarian or email the Civil War Librarian.
Posted by Rea Andrew Redd at 2:22 PM