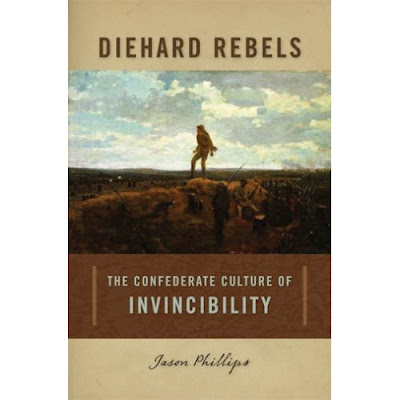 Well into the final months of the Civil War, countless Confederate soldiers earnestly believed that victory lay just around the corner. How could this be? Jason Phillips reveals the deeply ingrained attitudes that shaped the reality of these diehards not only during the war but in the subsequent era, when the myth of the Lost Cause was born.

Much is known about what Confederate soldiers fought for; far less is understood about why they fought on despite long odds and terrible costs. Drawing on soldiers’ letters and diary entries from 1863 to 1865, Diehard Rebels explains how religious dogma and perceptions of Union barbarity and ineptitude affirmed in many soldiers a view of an indomitable South. Within the soldiers’ closely circumscribed world, other elements reinforced convictions that the South was holding its own against great but surmountable odds. Close comradeship and disorienting combat conditions were factors, says Phillips, as well as conclusions drawn from images and experiences contradicting the larger reality, such as battlefields littered with enemy corpses and parade-ground spectacles of Confederate military splendor.

Troops also tended to perceive the course of the war in far-off theaters, the North, and overseas in positive ways. In addition, diehards were both consumers and conduits of rumors, misinformation, and propaganda that allowed them to envision a war that was rosier than the truth but still believable. Instead of crippling diehards after defeat, old notions of southern superiority helped them uphold southern honor. The central elements of Confederate invincibility fueled white southern defiance after surrender and evolved into the Lost Cause.

Table of Contents:
Acknowledgments
Introduction. Southern Invincibility and Confederate Defeat
Chapter One. The Smile of Providence: Confederate Religion and Invincibility
Chapter Two. The Mask of Cain: Enemy Images in Rebel Minds
Chapter Three. Without a Murmur: Confederate Endurance and the Immediate War
Chapter Four. Gray Grapevines: Rumors and the Distant War
Chapter Five. The Face of Surrender: Diehard Rebels in 1865
Conclusion. The Aftermath of Invincibility

Jason Phillips is an assistant professor of history at Mississippi State University. He has also taught at Texas A&M University.

James B. McPherson, whose 2007 book is 'This Mighty Scourge: Perspectives on the Civil War' likes it--
"Diehard Rebels is a major contribution to the history of the Confederacy and the history of Southern culture. It offers an important corrective to the hindsight perspective that portrays an irreversible slide down the slippery slope of demoralization and defeat after the twin defeats at Gettysburg and Vicksburg."
—James McPherson,

Bertram Wyatt-Brown, author of 'The Shaping of Southern Culture', likes it too--
“Phillips persuasively answers a Civil War mystery. Why did so many Confederates doggedly keep fighting when any rational observer would have recognized looming defeat? Examining a most impressive array of sources, he finds that religious faith, cheerleading propaganda, admiration of the officer class, hatred of Yankees, military discipline, bonding in the ranks, stubborn denial of the obvious were all factors. Phillips eloquently and poignantly recounts the deprivations and sacrifices that were endured in vain hope of eventual victory. Every Civil War student, both the professional and lay reader, will find Diehard Rebels highly moving and tragic.”

Text Supplied by The University of Georgia Press with edits by The Civil War Librarian
Posted by Rea Andrew Redd at 4:34 PM