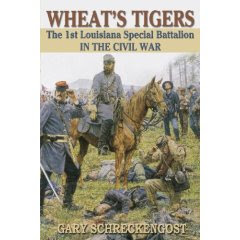 The author Gary Schreckengost reports that he has chosen to move his manuscript from White Mane/Burd Street Publishing to McFarland Publishing. Once scheduled for late 2006, his work on Wheat's Louisiana Tigers will now be coming out late 2007.

The cover above is from the White Mane/Burd Street Publishing of the unreleased book. The following is text supplied by McFarland Publishing.

From the little-known Filibuster Wars to the Civil War battlefield of Gaines’ Mill, this volume details the fascinating story of one of the South’s most colorful military units, the 1st Louisiana Special Battalion, aka Wheat’s Tigers. Beginning with a brief look at the Filibuster Wars (a set of military attempts to annex Latin American countries into the United States as slave states), the work takes a close look at the men who comprised Wheat’s Tigers: Irish immigrant ship hands, New Orleans dock workers and Filibuster veterans. Commanded by one of the greatest antebellum filibusterers, Chatham Roberdeau Wheat, the Tigers quickly distinguished themselves in battle through their almost reckless bravery, proving instrumental in Southern victories at the battles of Front Royal, Winchester and Port Republic. An in-depth look at Battle of Gaines’ Mill, in which Wheat’s Tigers suffered heavy casualties, including their commander, completes the story. Appendices provide a compiled roster of the Wheat’s Tigers, a look at the 1st Louisiana’s uniforms and a copy of Wheat’s report about the Battle of Manassas. Never-before-published photographs are also included.

About the Author
Author and historian Gary Schreckengost lives in Elm, Pennsylvania. An infantry officer in the Army Reserves, his work has been published in American Civil War Magazine, World War II Magazine, Field Artillery Journal and Armor Magazine.

Text supplied by author and publisher with edits by The Civil War Librarian.
Posted by Rea Andrew Redd at 9:35 PM