Off Topic Novel: The Book Thief 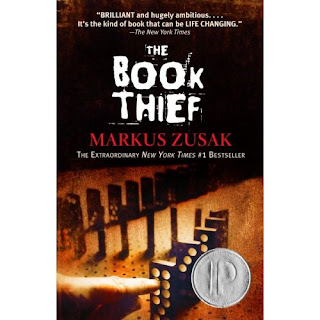 With a title like "Book Thief" any librarian would be entrigued. When I finished, I realized that I had just read Book Sense Journal's 'Book of the Year' in children's literature. Yes, this book is recommended for ages 9 and up and I thoroughly enjoyed it. The Book Thief is not for every nine year old, that's for sure but it will keep the attention of sophisticated teens and most adult readers.

Death, not to be confused with Satan, narrates the World War II-era story. Death notices Liesel Meminger at her brother's funeral. It is the theft of The Gravedigger's Handbook which brings her to the attention of this very busy spirit. Leisel's father and mother, communists, are arrested and the child goes to live with a foster family (the Hubermanns) in a working-class neighborhood of tough kids, acid-tongued, spitting mothers, and loving fathers who earn their living by the work of their hands. Liesel collects more stolen books as well as a peculiar set of friends: the boy Rudy, the Jewish refugee Max, the mayor's reclusive wife who has a whole library from which she allows Liesel to steal.

Death recounts it's exploration of humanity with Liesel dispassionately. Death is not a sentimental storyteller, but it does attend to an array of satisfying details, giving Liesel's story the nuances of chance, folly, and fulfilled expectation. Death, the narrator, is sardonic, wry, darkly humorous, compassionate and doesn't carry a scythe. "I traveled the globe . . . handing souls to the conveyor belt of eternity . . ." "I warned myself that I should keep a good distance from the burial of Liesel Meminger's brother. I did not heed my advice," Death writes.

Stolen books form the spine of the story. Though Liesel's foster father realizes the subject matter isn't ideal, he uses "The Grave Digger's Handbook" to teach her to read. Reading opens new worlds to her. She rescues a book from a pile being burned by the Nazis, then begins stealing more books from the mayor's wife. After a Jewish fist-fighter makes his way to the safety of the Hubermanns' basement, he whitewashes the actual pages of Mein Kampf to create his own book for Liesel, which sustains her through her darkest times. Other books come in handy as diversions during bombing raids or hedges against grief. But it is the book she is writes that, ultimately, will save Liesel's life.

Portions of the text were provided by the posted reviews on Amazon.com by Francisca Goldsmith, of the Berkeley Public Library, CA and by Elizabeth Chang, of The Washington Post.
Posted by Rea Andrew Redd at 1:33 PM