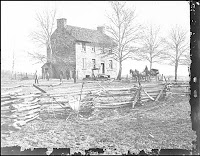 With the addition of Virginia to the Confederacy on April 17, 1861, many in the South thought independence was won. The second largest state in the Confederacy brought with it a navy yard near Norfolk, a canon foundry in Richmond, and more people than any other single state in the new nation. By the end of 1861, it became evident though that "the complex and often ontentious relationship between strategy and politics, and the squabbling between generals, many of whom had agenda of their own" were a severe impediment to a successuful rebellion. (p. 28)

In April, Robert E. Lee, major general commanding the state's militia and later military advisor to president Jefferson Davis, understood danger coming to Virginia from four directions: from Washington, D.C., from Harper's Ferry, VA, from the Ohio River Valley, and from Fortress Monroe on the Atlantic shore. Lee was right. The day after Virginia voters accepted the state convention's secession ordinance, Federal troops seized Alexandria, and within 60 General Benjamin Butler guided troops from Fortress Monroe to Big Bethel, which was about halfway to Yorktown.

During the same month, George B. McClellan directed a two pronged invasion from Ohio and into the western counties of Virginia. The crossroad towns of Grafton, Clarksburg and Romney in the eastern panhandle was captured. Wheeling and Grafton in the northern panhandle were seized as was the Kanawha River Valley in the western and central counties. The Cheat River valley was occupied after CSA forces were chased away. By September, the western counties of the state were held by Union troops. The drive was Washington, D.C. was thwarted in July at Manassas.

The loss of the western counties prompted Davis to send Lee to the front. He arrived and failed to achieve coordination between the two Confederate commanders, Floyd and Wise. Davis called former governor Wise to Richmond and sent 9,000 fresh troops to Lee. Rosecrans, front line Union commander in western Virginia, strategically withdrew to the mountiantops and let the foul weather do its work on the lines of the Confederate advance. On the Potomac front, the Federal debacle at Ball's Bluff in October and the Federal success at Dranesville in December, solidified a stalemante.

By the end of 1861 in Virginia, the Confederates knew that "one Reb could not whip three Yanks, at least not every time." The Federals understood the war would be lasting longer than 90 days. Both sides came to grips with "lessons not only about the management of troops, but about the care and feeding of political superiors." At the end of 1861, it was apparent that these four Virginian four front would see more military activity. 1861 in Virginia was militarily decisive but it would be in 1862. (pp. 42.43)

For more on the 1861 war for the western counties:
Lee Vs. McClellan: The First Campaign, Clayton R. Newell
Rebels At The Gate: Lee And Mcclellan On The Front Line Of A Nation Divided, W. Hunter Lesser

For More on Bull Run/Manassas:
A Single Grand Victory: The First Campaign and Battle of Manassas, Ethan S. Rafuse
Posted by Rea Andrew Redd at 2:04 PM