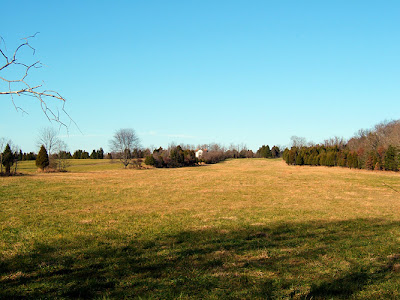 In July 2002, as my daughter was being oriented to George Washington University in D.C., I drove down the road to Manassas National Battlefield Park. In the morning I hiked the plateau from the Stone Bridge to Henry Hill House. In the afternoon I walked the Iron Brigade's route to Brawner's Farm and climbed around the railroad bed's famous 'cut' where Jackson's men stoned Federal soldiers. Last year, I had the privilege to camp, as a reenactor, in the Manassas Battlefield Park. The Pennsylvania Reserves reenactment group encamped on Stuart's Hill and I with several other hardy souls marched to Chinn Ridge.

Of course, after reading several books on 1st and 2nd Manassas since the 1960s, my ideas changed whenever I walk the ground. The Iron Brigade had to march uphill to reach the Stonewall Brigade. Longstreet's Assault did not roll over a flat Virginia plateau, but went up and down dry gullies with thickets that broke up the ranks. I had mentally pictured Longstreet's Assault as being similar to the Pickett-Pettigrew-Trimble Assault at Gettysburg. No so in the least bit.

This August, I'll again march in the steps of the soldiers. As a Civil War infantryman and as a Signal Corps officer I'll be with my unit, encamped on Stuart's Hill but marching to Brawner's Farm. John Reid, NPS Ranger at Manassas National Military Park sent the following remarks to Pennsylvania Reserve event co-coordinator Joe Sodomin.

". . . the demonstrations [are] concentrated at Brawner Farm, and we are looking to really inaugurate the site with its renovated house and the grounds where the first combat of the second battle occurred with a grand finale to the summer. We are expecting 120 from the Stonewall Brigade and the 3rd U.S. and 3rd Maine (who will portray the 19th Indiana and the 2nd Wisconsin); with your 40 Pennsylvanians [Pennsylvania Reserve Division, a reenactment group,] we can really represent Brawner with both Black Hat and Doubleday's reinforcement to Gibbon (56th Pennsylvania). This is shaping to be the largest single event we have ever contemplated here, let alone presented! The troops will be like "sardines in a barrel" but we have enough room at Stuart's Hill and Brawner for camp bivouacs and demonstrations."
Posted by Rea Andrew Redd at 11:04 AM

This is so wonderful to find that my ancestors had direct confrontation in the Civil War and on their farm. I am a descendant of Brawner's as my mother was born Vera Louise Brawner and her dad was named General Lee Brawner. Thank you for placing this information on the web for all to see. Elizabeth Irene Ingram

I too am a Brawner and am a descandent of the Brawner's of Manassas. Mary Brawner's family were the first settlers in Emmittsburg, Maryland. She was my great, great, great grandmother.
I am also a descandent of a Doctor Brawner from Thurmont, Maryland. I know little about him, but I do know that he hid slaves in the bottom of his house while enroute to freedom in the North.
I would like to have contact with any other relations, especially those with information on our family tree. Robert A. Brawner, Jr. Gettysburg, Pa.