CWL --- Maps of Gettysburg: First Edition Sells Out Within the First Week and a Few Quibbles 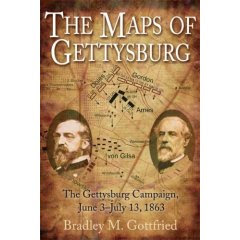 It appears that the first edition of Maps of Gettysburg by Bradley Godfried has sold out in its first week. The publisher, Savas Beattie, is putting out a second edition that will be available in early to middle August. Current orders at Amazon.com won't be shipped until then. One reader on the Gettysburg Discussion Group reports that Barnes and Noble has 33 in the warehouse; other readers state that the Farnesworth House in Gettysburg has several and Butternut and Blue will be bringing first edition copies to the vendors exposition in Gettyburg the weekend of July 7 and 8.
Savas Beatty, the publisher, has a few of the first edition left (as of July 6th). Their phone number is 916-941-6896.

An early quibble is with the title. "Why July 13th when the last CSA forces withdrew from Falling Waters, MD on July 14th?" asks George Frank, a Gettysburg Discussion Group member.

Also, Richard Faser of the Library Journal has a few quibbles:

One specific complaint about this book should be aired before all others: its title, The Maps of Gettysburg-rather than Maps of Gettysburg-implies that the maps contained herein have some official status or particular historical significance or are recognized as definitive in some way. In fact, they are the work of Gottfried (president, College of Southern Maryland).

Well executed in black-and-white, they have no particular quality that confers special importance upon them. The author provides 144 of these maps of the Gettysburg campaign and battle, each with a single-page commentary explaining the action rendered. Regiments are depicted as black or white blocks with appropriate numbers and state abbreviations, and terrain and roads are identified.

Perhaps the greatest oversight is that while the author provides details of space, he supplies none of time. Rarely does he offer any specific information about the duration of a given phase of the battle or what time of day it took place. In his cumulative overview of this abundantly studied battle, he never achieves the clarity for which he seems to be striving. For Civil War students and enthusiasts who already know enough about the subject, this book may be handy. An optional purchase for academic libraries.

The Civil War Librarian will follow the popular reception and the scholarly reviews.
Posted by Rea Andrew Redd at 1:05 PM