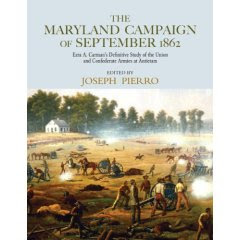 In the words of Joseph Pierro, editor

+ The release date is now September.

+ The book runs over 400,000 words (2-3 times the length of the average book). It will also be produced in a larger trim size (i.e, the pages are physically bigger than most books) in order to accommodate the volume of text. As to a final page count, the book is still in production, so that's still an open question. (No text will be cut, but the publisher is experimenting with a number of formats, some of which radically change the number of pages necessary.) The final stage (work on the index) will begin in about two weeks--and we're very hopeful that the book will be available for the 145th anniversary of the battle of Antietam this September 17.

Maps, not in the book but on the WWW:

+ It does NOT contain maps--which may sound odd for a work of this type, but there is an explanation. At the time Carman was compiling this massive history of the campaign, he was also working on a complete Atlas of the battle, covering the entire action in 14 large plates (the same size as the maps in the OR Atlas). Unlike his history, Carman's Atlas was published by the U.S. government (in 1904, with a second edition in 1908), though it's now long out of print and very difficult to find outside of major research libraries.

+ As it happens, however, the Library of Congress has recently digitized the entire Atlas and made it available on its website--along with free software that enables users to zoom and move across the maps and reproduce any section with crystal clarity. Anything less than Carman's original maps seemed a disservice to his text, and thus the editors chose to provide the website for the Atlas. Someday, hopefully, it will prove cost effective for a publisher to reproduce these absolutely beautiful maps in a new print edition.

The link to the digitized Atlas itself is: