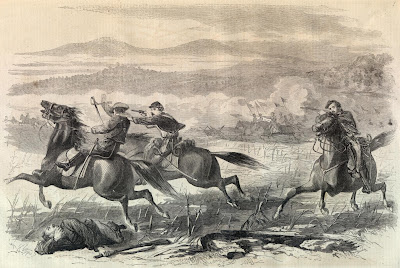 The following is the July 17th posting of J. David Petruzzi from Hoofbeats and Cold Steel at http://petruzzi.wordpress.com/

"Several years ago, Eric Wittenberg, Mike Nugent, and I completed the bulk of the work on a scholarly work about the retreat from Gettysburg. We were finishing ours up at about the same time Kent “Bat” Masterson Brown was completing his great book on the subject." [CWL note: Retreat From Gettysburg: Lee, Logistics and the Pennyslvania Campaingn, Kent Masterson Brown, 2005]

"So how is ours different from Brown’s?
Where Brown concentrated on the logistical aspects of the retreat, our book goes into very deep details of the nearly two dozen fights and skirmishes that occurred from July 4 until July 14 when the Army of Northern Virginia finally crossed the river. Our chronological narrative features the fighting, with the logistics as a background. Brown’s book is more the opposite. The two books together will finally give readers the full story of the Gettysburg retreat.

In addition, our book will also feature two detailed driving/walking tours of both the main retreat column and the Wagon Train of Wounded, from Gettysburg to the river. On both tours we were greatly assisted by retreat guru Ted Alexander. Think of this book as very much like Eric’s and my Stuart’s Ride book in scope, but on the retreat.

The book will be published by Savas Beatie LLC, the publisher of our Stuart book - and we couldn’t be more pleased. Savas does an absolutely wonderful book. The fine maps (lots of ‘em!) were done by the skilled Ed Coleman.

Release is expected by next year’s anniversary (perhaps May-June 2008)and I’ll keep everyone posted here as the book progresses."

CWL will look forward to this complimentary companion to Brown's Retreat From Gettysburg. 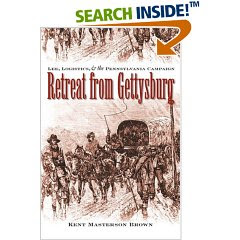