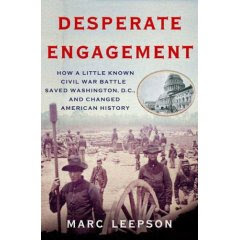 +The grand opening celebration for the new Monocacy National Battlefield visitor center took place on Wednesday, June 27th. The event featured a number of speakers, including a keynote address by former Congresswoman Beverly Byron, followed by a ribbon-cutting ceremony and reception. A slide show of its construction is at the Monocacy National Military Park's internet home page.

+The Civil War Librarian hopes to include a day of Signal Corps instruction at Monocacy NMP on his vacation in early August. To combat the disruption of communication during the Civil War, signal corps were used to relay messages through the use of flags. Frederick County, Maryland's Sugarloaf Mountain was used as a signal station throughout the Civil War, relaying information about Confederate activities from both Harpers Ferry and Washington, D. C. On Saturday August 4 and Sunday 5, a living history encampment of the Signal Corps will occur at the Monocacy NMP's Gambrill Mill. Demonstrations and informal interpretive talks will be conducted throughout the day to bring this unusual form of communication to life. For more information call (301) 662-3515.

+The leading book critic of the Washington Post Book World and noted author gives a boost to the Mononacy National Battlefield Park by selecting a new book for his July 15th review. He likes it but has some quibbles. The Civil War Librarian has not yet perused the book but descriptions of it on Amazon.com allow me to conclude it is a mainstream publication, which is not a bad thing. The Battle of Monocacy needs to elevated in the 'popular mind'. A dramatic/documentary film, No Retreat From Destiny: The Battle That Rescued Washington, was released 2006 has helped to do that also.

On July 10, 1864, about 8,000 Confederate troops under the command of Gen. Jubal A. Early stood at the doorstep of the District of Columbia. Literally. They were "bedded down alongside the Georgetown Pike, strung out along a five-mile stretch from Gaithersburg to Rockville." The city of Washington was protected by an impressive array of fortifications -- Early appraised them as "exceedingly strong" -- but defensive manpower was sorely lacking; though nearly 35,000 troops were needed to protect the city, only about 10,000 were on hand, "nearly all of whom were physically incapacitated in some way or had never fired a weapon."

Yet Early, who certainly was no coward and, indeed, in the past had been feared by Union commanders for his boldness and inventiveness, chose not to attack. Whether he could have occupied the city has been endlessly debated, but that he chose not to try probably was a turning point in the war. As Marc Leepson writes:

"If [Early] broke through the ring of forts surrounding the city, Confederate veterans would be running loose on the streets of Washington, D.C. The U.S. Treasury, virtually undefended, was sitting ready for looting. Tons upon tons of brand-new, desperately needed war supplies, from blankets to rifles, were there for the taking. The president himself was a target of opportunity, not to mention the U.S. Capitol and dozens of other government buildings. . . . A 'rebel occupation of Washington for however brief a time,' former secretary of the Senate George C. Gorham later wrote, would have brought about 'serious consequences.' One of them 'would almost certainly have embraced the recognition of the Southern Confederacy by France and England, both of which governments were understood to be extremely desirous of even a slight pretext for such action.' "

That this did not come about, Leepson argues in Desperate Engagement, can be traced to two factors. The first and most obvious is that at the last minute Washington's defenses were significantly improved because, at the orders of Ulysses S. Grant, the seasoned troops of the Union's Sixth and Nineteenth Corps were rushed to the city from the Richmond area. The second is that three days before, Early had been forced into a fight he did not want at Monocacy, in Maryland a few miles from the town of Frederick, against federal forces under the command of Gen. Lew Wallace. Early prevailed in that engagement, but at considerable cost: "His ranks were thinned by the hundreds of men killed or severely wounded at Monocacy," and "of those remaining, large numbers were unfit for battle because they suffered from exhaustion after marching two days after the fight at Monocacy in what Union prisoner of war W.G. Duckett called the 'almost suffocating' heat."

All of which is to say that in this book we find ourselves firmly implanted in the land of what might have been. If Wallace had not possessed what he called "the determination to stay and fight," Early and his fresh troops would have had a straight shot to Washington. If Early had not been delayed at Monocacy, Grant might not have had time to grasp the seriousness of the threat to Washington and certainly would not have had time to rush crack troops to its defense. If Early had occupied Washington, all the dire consequences elaborated above probably would have arisen, and doubtless many others as well. The Confederacy still would have been in dire straits -- militarily, economically and politically -- but it would have been in position to sue for a peace far more favorable to its interests, probably one that would have maintained slavery in the Confederate states.

As is usually the case when we enter the land of might have been, the most salubrious effect of the exercise is to remind us that in war nothing is foreordained and the line between victory and defeat almost always is incredibly thin. When Robert E. Lee sent Early on his mission to Washington, he believed that Grant "would be forced to send a significant number of his troops from outside Richmond and Petersburg to defend the Union capital," and even though the mission failed to achieve its grandest goals, it did achieve that one. Grant might well have taken Richmond in the summer of 1864, ending the war then instead of in the spring of 1865, sparing untold thousands of lives and leaving both sides in better condition to reunite. As Leepson writes: "The July 9, 1864, fight at Monocacy has come to be known as 'the battle that saved Washington.' It was. It also very possibly was the battle that played a pivotal role in the series of events that started with Lee's June 12, 1864, order to send Early to the [Shenandoah] Valley. That series of events prolonged the Civil War for as many as nine long months."

In great measure this was due to Lew Wallace. He is best known now for his hugely successful novel Ben Hur: A Tale of the Christ (1880) and the three Hollywood adaptations of it, but there was much more to him than that. His "long, eventful life" included journalism, law, the army and politics. By the spring of 1864, at age 37, he was "commander of the Eighth Army Corps and of the Middle Department based in Baltimore," his authority including "all of Delaware and Maryland from Baltimore West to the Monocacy River." He "was, in effect, the military governor of the city of Baltimore (with nearly 250,000 people, the nation's third largest) and the state."

Wallace was ambitious and packed a not-inconsiderable ego, but he was also principled and patriotic. He "had no formal military training," but at Monocacy he "chose an excellent defensive position," with "the [Monocacy] river in front of him, a river with few easily crossed fords." His force of 5,800 men was far inferior to Early's, which was somewhere around 16,000, but Early did not want to engage him: "The last thing he wanted was an all-out field battle against a significant enemy force bolstered by hardened, veteran Sixth Corps troops holding high ground on the other side of a river," but that is exactly what Wallace gave him. It ended only when "the overpowering, massed Confederate artillery" forced the issue and sent Wallace's forces into retreat. He left the battlefield "believing, he said to his dying day, that by holding up Early for nearly an entire day, he had reached his goal of giving Grant time to get experienced troops up from Petersburg to defend Washington and letting [Union army chief of staff Henry] Halleck know, with no degree of uncertainty, that Early and his men would be moving on a beeline toward Washington."

All of which is probable but scarcely certain. Had Wallace not possessed the foresight and determination to ignore Halleck's indecision and timidity, the capital of the United States might well have fallen into Confederate hands, but by the same token some other obstacle might have arisen in Early's path. On the whole, nevertheless, Leepson's arguments are persuasive, though it must be said in candor that he does not advance them in prose of any distinction or interest. Writing about military maneuvers and military commanders is a tricky business that can lead to confusion and cameo biographies indistinguishable from each other. These are traps that Leepson does not entirely avoid. He seemed more at home in a previous book, Saving Monticello, in which military history was of no consequence.

Still, Desperate Engagement will (of course) be of interest to Civil War buffs, whose numbers remain legion nearly a century and a half after the war's end, and to many other readers as well. Wondering about what might have been is a game more than a study of history, but it is an instructive, useful game that deepens our understanding of history's uncertain, unpredictable path. ·

Portions of the text of this post came from the Monocacy National Military Park's webpage and from the Washington Post's Book World.
Posted by Rea Andrew Redd at 12:22 PM

Labels: Battle of Monocacy, Desperate Engagement, No Retreat From Destiny