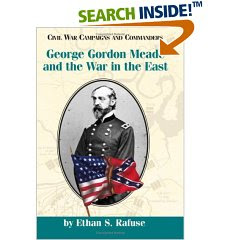 Ethan Rafuse states his purpose frankly. To provide a chronicle of the life and career of George Gordon Meade and to delineate the forces that shaped the Union war effort in the East and the military and political problems that Meade and other generals encountered as they pursed victory are his goals.(p. 15) He splendidly achieves them.

As in A Single Grand Victory: The First Campaign and Battle of Manassas (2002) and McClellan's War: The Failure Of Moderation In The Struggle For The Union (2005), Rafuse deftly handles the primary sources to reveal the men and their mindsets on the battlefield. In each of his three works, the major dispute between the West Point trained generals, the political generals, and the administration of Lincoln is the line of operations to be pursued when the army advanced upon Richmond.

Within the context of this struggle, Meade the commander of a brigade, a division, a corps and an army manages to excel. Citing Meade's extensive letters to his wife, Rafuse reveals a general who while it "was his job to offer suggestions, the final decision as to what policy he was to implement" rested with the Lincoln administration.(p. 169) Unlike McClellan and Hooker, Meade had a great contempt for history that had yet to be written. The statement of this attitude was in a letter to his wife written on April 10, 1865, the day after the surrender of the Army of Northern Virginia. The first draft of that yet to be final draft of history appeared in newspapers. He had a very low opinion of politicians and newspaper editors. He made a effort to shape policy with politicians but made no effort to shape perceptions of newspapermen. He did not attempt to work with politicians by cultivating his own lobby of congressmen and senators.

As a commander of a brigade in the Pennsylvania Reserve division, Meade suffered two wounds at the Battle of Glendale, June 30, 1862. He recovered and rejoined his brigade in time for the Battle of 2nd Manassas in which the Pennsylvania Reserves refused to retreat in the late afternoon of August 30 and, it can be argued, saved the Army of Virginia, from a truly ignominious defeat by capture. Meade ascended to division command before Antietam and to corps command during the battle. He returned to command of the Pennsylvania Reserve division for the Fredericksburg Campaign. He commanded a the Fifth Corps during the January 1863 'Mud March.' He became the last commander of the Army of the Potomac during the early morning hours of June 28, three days before the Battle of Gettysburg.

Meade confided to his wife many personal evaluations. McClellan 'errs on the side of prudence and caution, and that a little more rashness on his part would improve his generalship.' (p.47) Towards Burnside "I never felt so disappointed and sorry for any one in my life as I did" for him; "he really seems to have even the elements against him." (p. 57) "Hooker has disappointed the army and myself in failing to show the nerve. . . . I am sorry for Hooker, because I like him and my relations have been agreeable with him; but I cannot shut my eyes to the fact that he has on this occasion [Chancellorsville] missed a brilliant opportunity." (p. 66)

As for Meade's own generalship, Rafuse provides quotations from both Rebel and Union generals, particularly E.P. Alexander and U.S. Grant, that express an appreciation of his competence and perception of duty. In the course of less than 200 pages, Ethan Rafuse has provided readable, even suspenseful, biography that will be enjoyed by both the buff and the scholar.
Posted by Rea Andrew Redd at 12:14 PM