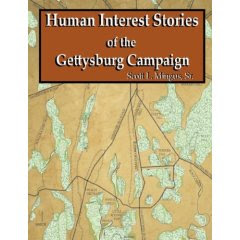 Having read as a child, "A Civil War Treasury of Tales, Legends & Folklore" by B.A. Botkin, I came to understand that some history was unlikely to have occurred or was probably made-up. A couple of decades later encountering "A Treasury of Civil War Tales: Unusual, Interesting Stories of the Turbulent Era When Americans Waged War on Americans" by Webb Garrison I didn't change my mind. I have assiduously avoided human interest story collections because they were folklore, similar to the ruling of the judge when examining the tales told during the ghost tours in Gettysburg.

I am suspicious of newspaper articles that are written 20 years after the event.
I am also wary of stories that rely on coincidence.

But, Gregory Coco's "Confederates Killed in Action at Gettysburg", "On the Bloodstained Field" and "On the Bloodstained Field II: 132 More Human Interest Stories of the Campaign and Battle of Gettysburg" warmed me up to the possibility of reading collected human interest stories; Coco treated the material as an historian and closely mined the primary sources. Published in the late 1990's, Coco's collections were incidental to my Civil War reading. Now, closely examining the battle Gettysburg through battlefield tours and the literature of the battle, I have come to imagine that human interest story collections are more than trivia or entertainment.

Scott Mingus has provided 101 pages of human interest stories that do not rely on the coincidental, the folklore, or stories reported at the family reunion. Stories taken from memoirs, diaries, regimental histories, vertical files from the GNMP library, papers in the state MOLLUS collections, county histories, and (yes) newspapers are supplied by Mingus. Organized into Invasion, July 1, July 2, July 3 and the Aftermath, the author has given a thematic structure to the material. About a third of the stories relate to civilians or civilian-soldier interactions.

Among my favorites: the Pennsylvania Reserves show no mercy to a sharpshooter, retreating Rebel soldiers fall through the roof a pig sty and discover food and clothes, Michigan soldiers skim water from cattle hoof prints to make coffee, both Union and Confederate wounded drown in the Rock Creek flood of July 4th and battlefield scavengers are with the duty of burning and burying horses.

Mingus work should not be perceived as being merely entertaining, of having little consequence, or of being compiled trivia. The stories he has collected illustrate the varieties of human interactions under stress. Civilians are both bold and cowardly, both merciful and ready to charge for milk and bread. Soldiers use humor for relief. If history is storytelling, then Mingus has collected stories that are useful for illustrating the larger history of the battle.

Additionally, the author has retold the stories in his own words. This is not a 'copy and paste' book; Mingus' writing style is consistent and his voice comes through. Usually in collections of stories, there are a variety of styles and voices that lead to a 'herky-jerky' reading experience. The author's consistent voice and steady style enhances the thematic aspect of the work. I'll be shopping for Mingus' "Human Interest Stories of the Antietam Campaign" and looking forward the second collection of Gettysburg stories.
Posted by Rea Andrew Redd at 9:18 PM