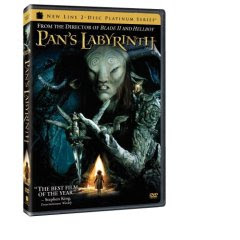 Spain, June 1944. A bloody civil war ended six years ago. Snuffing out the last bit of resistence in the mountains is the duty of Vidal,a fascist army captain. He orders his pregnant wife and his step daughter, young Ofelia, to the base camp located in a mill house. Ofelia enters a world of unimaginable cruelty and unimaginable magic when she moves in with her tyrannical stepfather.

A reader of fairy tales, Ofelia discovers, not far from the millhouse, a mysterious above and below ground labyrinth and meets a faun who sets her on a path to saving her ailing mother. But soon, the lines between fantasy and reality begin to blur when she realizes the labyrinth is also within the very stones of the mill. Before Ofelia can turn back, she finds herself at the center of a ferocious battle between good and evil, the army and the rebels, her mother and her stepfather. Inspired by the Brothers Grimm, "Pan's Labyrinth" is a fairytale for adults; there is no sex but there is violence. Ofelia may only be 12, but the worlds she inhabits, both above and below ground, are dark. Her guides is the persuasive Faun and the mother's maid, Mercedes. As her mother grows weaker, the faun offers to help her out of her predicament if she'll complete three treacherous tasks. Ofelia is not the perfect hero and her last decision is courageous, noble and fatal. 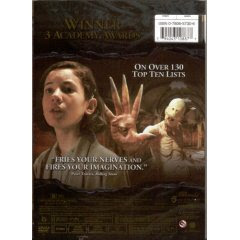 The story holds together and viewing it in Spanish with English subtitles increases the 'willing suspension of disbelief.' The second disk shows how the story was written, the director's vision of the story, the costumes and computer generated illustrations.
Posted by Rea Andrew Redd at 10:39 AM